The drooling. The relentless chomping on a pacifier, and anything else within arm's reach. The inexplicable crying.

We suspected Ian was teething. Yesterday, while we were seeing Dr. Clark to check on an ear infection (he's over it), she noticed that his first tooth has made an appearance. It's a sharp little incisor on the lower right of his jaw.

This came as no surprise to Marysia who has experienced first hand the pain of Ian's first bites. (Modesty prohibits any additional details.)

And so the cats now have something new to fear.

This has been a momentous two days in young Ian's life. On Saturday, March 27, 2004, Ian had his half year birthday!!! We celebrated by going to Manna for lunch, where we bumped into friends Sheri and Nathan who were more than happy to hold Ian while we ate. Ian enjoyed the company (he's very social) and rewarded his new friends with big smiles.

Then, it was off to the women's softball game against the dreaded LSU Tigers. Although the Tide lost, we enjoyed the warm day. Ian, who was wiped out by a morning of playing, slept through most of the game.

Another great landmark in Ian's life this weekend--he rolled from his back to his belly. Our belly boy has been rolling from his belly to his back for weeks now, but this is the first time he rolled the other way. By today, Sunday, he was able to repeat the act with grace. He was playing on his stomach, then rolled to his back. He played that way for a while and then rolled back to his belly. Yea Ian!!!

Ian also enjoys sitting up. He can hold himself up for a couple of minutes as long as he stays leaning forward a bit, though if he tips too much to the side or back he falls over.

And the next landmark of the weekend--this morning he ate some rice cereal for the first time. For a number of days now, he has been watching attentively when his parents eat, and even smacking his lips. Today, I mixed some rice cereal with milk to make a very liquidy gruel. Ian ate it right up! He also enjoyed holding the spoon and putting it in his mouth himself. He still needs some practice, but he'll be feeding himself in no time!!!

And thus begins our spring break. We're looking forward to taking long walks together, and maybe even taking an overnight trip toward the end of the week.

Ian and his mom both love bathtime. 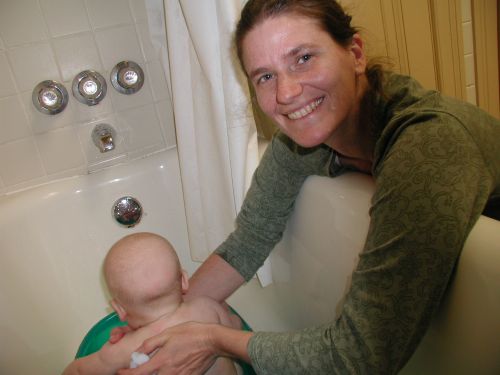 We never would have suspected that Ian is a fan of musical theater, but one night, while we were sitting around the kitchen table, I broke out in "Do, A Deer" from The Sound of Music and it totally cracked Ian up: 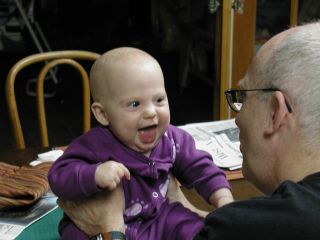 Naturally, we had to capture this on video. If you've got a Quicktime player installed on your computer, you can see and hear Ian giggling at:

It was 7th-ranked Alabama versus 13th-ranked U Tennessee. The weather was beautiful. Marysia, Ian and I went out for lunch at Manna (grilled cheese for M, chicken casserole for J, nothing for I) and then made our way to the stadium, where we met our friends Aaron and Chandler.

The game was a close one. Alabama took an early lead, but then UT jumped out ahead. Ian was in good spirits, enjoying the game and being outdoors. We left after the fifith inning, with Alabama looking like it was going to lose; but, in the botton of the last inning...

Trailing 3-1 going into the last half-inning, Alabama started to rally with Jackie McClain’s one-out single. Abbott hit Dominique Accetturo with a pitch, and could have loaded the bases when she hit Capper Reed with another. Home plate umpire Pat Lyon ruled that Reed didn’t make the necessary effort to avoid the pitch, drawing a fierce protest from Murphy and rousing the crowd of nearly 1,000.

Reed struck out, bringing up VanBrakle for Alabama’s last gasp. She drove the ball over Tennessee right fielder Ashley Cline, and it bounced off the top of the wall for the winning home run.

“It was outside and it was high," VanBrakle said. “I didn’t know if it was going to get out or not. I thought I hit it pretty good."

Said [head coach] Murphy, “It hit the top of the fence and I was praying it would go over, because we were all celebrating."

Alabama’s late surge struck at the heart of the Tennessee team.

“It was devastating," Tennessee co-coach Ralph Weekly said. “There’s no ifs, ands or buts about it. We should have kept control of it."

And here's what VanBrakle looked like as she rounded third base:

Ian in the Brown Alumni Magazine

Ian made an appearance in the Brown Alumni Magazine this month:

We presume that it'll be just the first of many mentions of Ian (class of '25?) in Brown publications.