Ian in Action at Art Night

On the first Thursday of each month, the City of Northport sponsors Art Night, where galleries stay open late and various activities occur. Basically, it's just an excuse for folks to meet and greet one another.

On the 7 June 2007 Art Night, Henri's Notions (a local Celtic-music band) was debuting their new CD, Trip to the Cottage.

Ian enjoyed himself, as always, by running around the Kentuck courtyard--this time with his friend, Max (the son of another Jeremy!). Of course, there was the inevitable spill, as this action series of photographs illustrates. 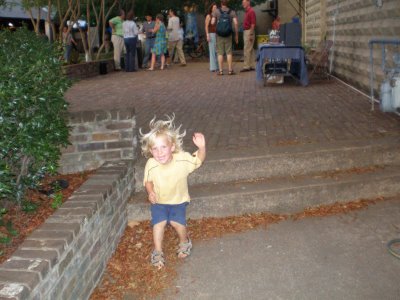 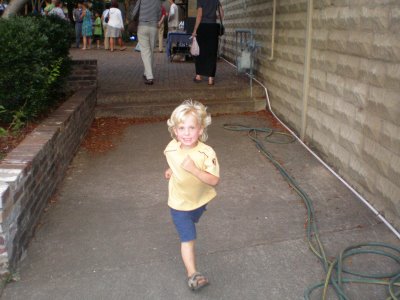 Fortunately, no serious damage was done. 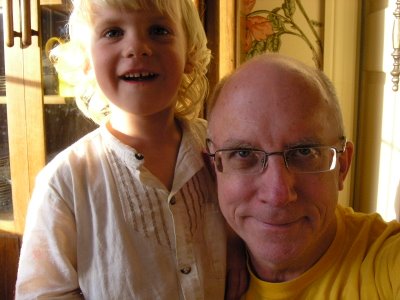 Just in time for Father's Day 2007, here's an up-to-date photo of father and son. 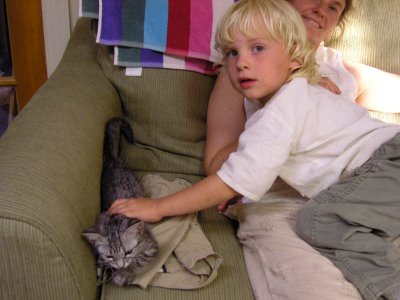 Jackson was born 7 April 2007. She was part of a litter that Kathy Oths and Bill Dressler foster parented, acquiring it from a pet-rescue organization. They'd given her the provisional name of Cupid. Ian chose the name Jackson for her permanent name. We don't exactly know why.
She arrived at our house on 8 June, after she'd been weaned (and litter-box trained!). Here she is in the dining room, contemplating life in Northport, Alabama. 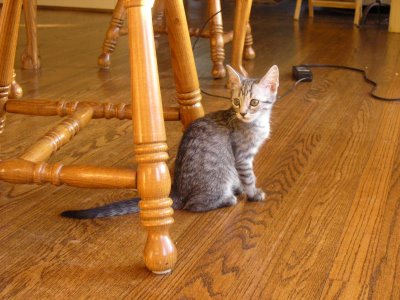 For the most part, Ian has been very good with Jackson. He loves playing with her, although sometimes gets frustrated when she doesn't want to play on his terms, when he wants to. Mostly, he's gentle with her, but he's still learning how to hold her (and when not to pick her up) and how to put her down.

Fortunately, Jackson is a very friendly, sweet and calm kitten (for a kitten). She enjoys being around people and will often nestle up to Marysia while she's sitting on the couch. One day she even hopped in Marysia's backpack there. 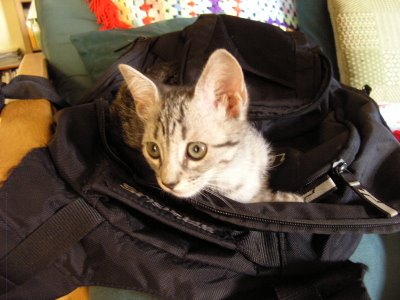 Jackson seems to have made friends with Java, Marysia's 13-year-old cat, about which we were concerned. Java and my cat, Flipper, never got along. They reached a certain détente, with Java controlling downstairs, Flip controlling upstairs and the staircase a no-cat zone where they frequently fought. Jackson and Java, in contrast, have yet to get into a real fight and they've even shown signs of getting along together. Java mostly ignores Jackson, but Jackson occasionally pounces on her and tries to entice her to play -- which Java tolerates.

Marysia's theory is that Java finds a kitten non-threatening and thus deigns to have her share her space. And Jackson is too young to know any better. So far, it seems to be working!

So, Ian's would be Jackson Bellwood. Pretty classy. And Marysia's would be (if we use her pet duck's name): Tami Cedrus.