Ian supervises the installation of his "big boy" bed by a couple of guys from Spiller furniture. 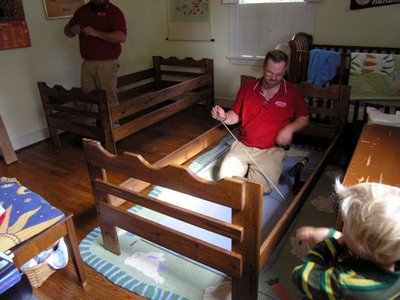 This is a big, and overdue change for Ian--moving out of his crib and into a bed. He's had the ability to climb/jump out of the crib for several weeks, which made us quite nervous; but he never showed any inclination to change his sleeping arrangement. He liked his crib, leading us to think that he might rebel at the notion of leaving it.

But no! He loves his new bed and now that we've made the switch, he hasn't once asked to go back to his crib. 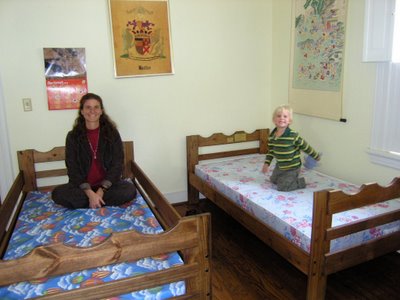 We suspect that one reason he likes the new bed so much is the railings on its side (see the bed on the left). He loves to climb over them and generally mess around with them. The reason one of these two twin beds has railing is because the two are actually bunk beds. We decided that Ian was still too young (and that he still careens around too much at night) to use them as bunk beds, but, conveniently, they can be used separately with very little fuss or muss. Later, we'll convert it into a bunk bed, but, for now, it suits our purposes perfectly as two twins.

Now, if only we can convince Ian that taking naps is a good idea...