Over a month (!) has slipped by since Ian's birthday. Before any more time passes, I want to record that he had a fine, extended birthday. It began on the actual birth date, 27 September, with a couple of presents in the morning. At his daycare, they had a little birthday celebration, but not for him! There were three birthdays that week and so his teacher asked us to spread them out. So, they had a party for Ian the day after his birthday; Marysia brought cake and we had a fine time.

But to return to the actual birthday: we went out to Chuck E. Cheese's. It was Ian's first visit there ever and he had a blast. Coincidentally, we ran into a pal of his, Marco, with whom he played air hockey. And then we also ran into Jason, a anthropology colleague of Marysia's, who was there with his daughter. It was quite the happening place.

The partay continued at home where we had more gifts and an ice-cream cake. Ian blew out all three candles himself! 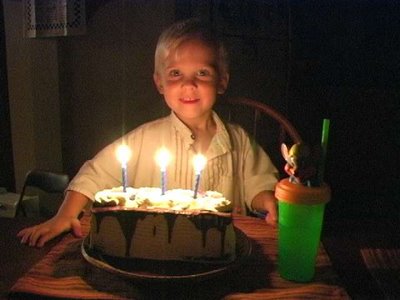 (The cup to his left is from Chuck E. Cheese's.)

The celebration wasn't over yet, however. We had too many gifts for one day and so we extended the gift-giving to the weekend, when he received his "big" present: a kid's workbench, with tools and "nails" and "bolts" and all sorts of things to bang on.

He loved that and his other gifts, including a pop-up book, more track for his Thomas the Tank Engine train, plastic food for his plastic oven, and more!

So, are the "terrible twos" over? We shall see... But so far Ian really seems to be enjoying being three.