A couple of weeks ago, Marysia asked Ian what he wanted to be for Halloween. "An airplane," he replied without hesitation. A few days later, she asked him again. Same answer. So, we set about building an airplane costume for Ian.

We found a cardboard box and transformed it into a fuselage. Wings and the tail assembly were similarly fashioned. I made a trip to Anders Hardware, in what is inevitably referred to as "historic downtown Northport," and a very helpful salesman supplied the nuts and bolts to make a propeller mechanism that would actually spin. And he came up with a strap that we threaded through the cardboard in order to fashion suspenders to hold up the fuselage.

By the night before Halloween, we'd assembled it and just needed to paint it.

Ready for take-off from the screened porch! 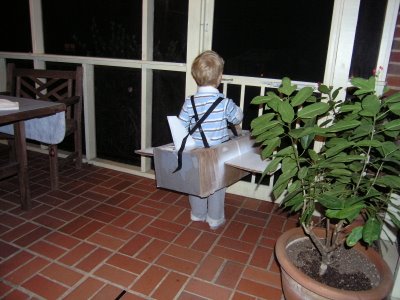 On Halloween, Ian piloted his now-painted aircraft to the UCCS, with Mommy and Daddy helping him maneuver through the doorways. The tail reads, "Ian Air." 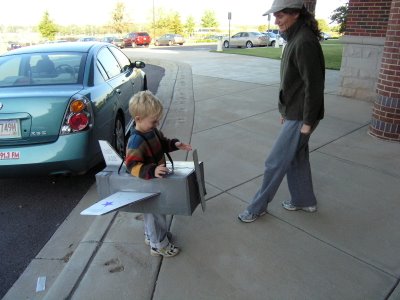 The other kids seemed quite impressed with Ian Air. 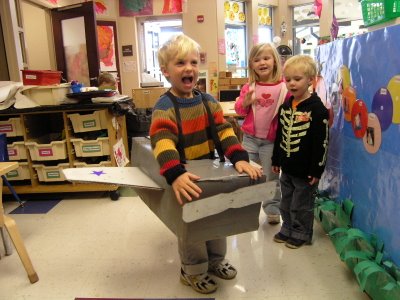 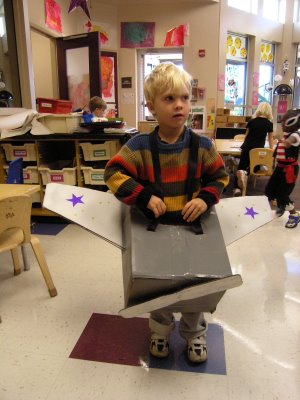 That afternoon, all the kids from his class walked next door to the Capstone Village retirement community. The retirees dispensed candy and played games with the kids. I'm sure Ian Air was a big hit.
Then, that evening, the trick-or-treating continued, with a walk... er... flight around our neighborhood. 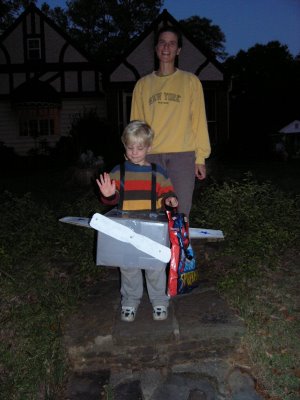 The airplane held up for the entire day, to my relief, and Ian now has a huge cache of candy -- which we have told him to restrain himself to a couple of pieces per day. At that rate, it should last until Memorial Day.