Oh, there had been spit-up before. Sure, plenty of it. But last Saturday was Ian's first encounter with a real stomach bug. (Don't worry. There are no photos to accompany this blog post.)

It began on Valentine's Day. The three of us went out for a valentine's lunch at the Globe (site of Mom and Dad's first date). It was quite yummy and Ian was in a good mood. We ran into Olivia and some other folks we know. Chatted them up.

That evening, we watched Under the Tuscan Sun, a romantic film (on DVD) that I gave Marysia for Val's Day. Talk about "great minds thinking alike": Marysia had looked for this DVD at Blockbuster last week and, when she couldn't find it, she bought me a gift subscription for rentals there; and my dad gave a VHS copy of the same film to Mom, too!

While we were watching the film, Ian had his first genuine throw-up (up-chuck?) -- all over himself, Marysia (she had just finished feeding him), and the bed. A mess, but, I have to say, not nearly as gross as adult vomit. This concerned us a bit, but baby's GI tracts are less than reliable so we chalked it up to the crab cakes Marysia had had for lunch.

Now we were worried. As first-time parents facing our first-time stomach bug in the middle of the night, we were more than a little distressed. Will he dehydrate himself? Should we take him to the hospital (which, fortunately, is less than 10 minutes from our house)? Does he have a temperature?

Fortunately, he did not have a temp and he was plenty moist. Plus, he was still in good spirits and didn't seem fazed by the fluid coming out of his mouth. We all, tentatively, went back to sleep.

The next morning, Sunday, Ian was chipper, but a little off his feed. Not quite his regular self, but still in a mostly good humor. We hoped were were past the worst of it. And, really, we were, but the darn thing persisted -- affecting the other end of Ian's GI system. On Monday, Ian's day-care worker, Christina, called Marysia in the afternoon to report that Ian had diarrhea and had to come home early.

On Tuesday, Ian threw up again in the morning. We were planning to keep him home that day anyway because the day care has a policy of not bringing a kid back until 24 hours after his affliction. The throwing-up just confirmed it.

Then Marysia got sick, too. She taught her Tuesday morning class and came home midday to nurse Ian, but she was nauseous and had a headache and just all-around felt like crap. She canceled her afternoon class and tried to rest.

Fortunately, everyone was feeling much better on Wednesday. I went off to work. Ian went to day care where he had one suspicious poop, but was essentially fine. And Marysia returned to her projects.

Now, a week later, everyone is back to normal, I'm happy to report. And through it all, Ian was quite the little soldier, never cranky or complaining.

Ian's been a busy little guy this week.

Not only did he (1) grab his own foot for the first time, he also (2) turned from his back to his side. Then, there's also all the (3) staring at his hands.

This puts his height and head circumference in the 75th percentile and his weight just below that. He's a big boy!

And he got stuck at the doctor's. Three times:

Pertussis? Pevnar? What the heck are these things?

I'm sure that Ian doesn't want to mess with any of these things, but I don't think Ian understood the wisdom of being injected with these vaccines.

The big news for us is that Dr. Clark said that Ian's head movement is so strong that the SIDS risk is greatly diminished. Consequently, we can let him sleep on his belly if we're in the same room with him or using a baby monitor. And since Ian refuses to sleep in his back, this is BIG NEWS.

One of our biggest struggles these past months was getting Ian to sleep. We've been turning him like a rotisserie chicken, trying to get him to sleep on his back or at least his side. A tiring, exhausting battle. But now . . . now we can modify our battle plan for sleep!

Walkin' in Our New Hats 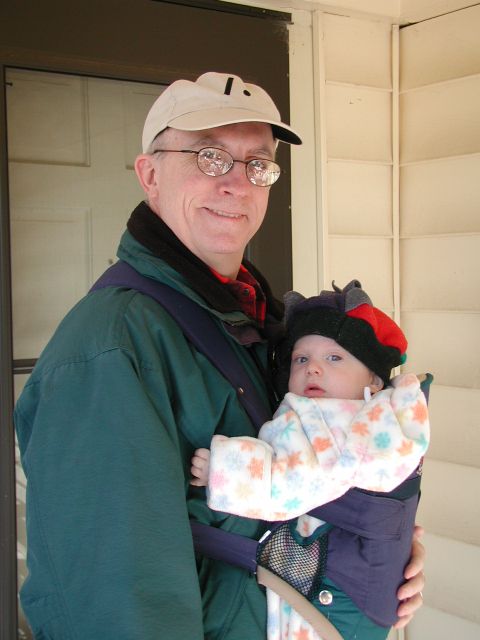 Off to the convenience store for a Mr. Pibb--wearing our relatively new hats:

JGB in a Slashdot hat and JIGB wearing something out of the Lil' Rascals or Archie comics.

It's not Ian's first cold (I think it's the third), but it is the one that's given us the most difficulty.

All three of us were sleep-deprived zombies the next day.

But, I'm very happy to report, Ian snapped back on Friday. He was still congested, sneezing and coughing, but he had a normal night's sleep--putting all three of us in much better spirits this weekend. And last night he even slept for 8 hours straight, which is not his usual pattern.

Day by day, he's producing less snot and getting back to his ol' cheerful self.