Special Treats for Ian & His Parents

Tonight both Ian and Marysia and I had special treats.

Ian had a playdate with (aka, was babysat by) his day-care teacher, Rachel--whom he just loves to pieces. 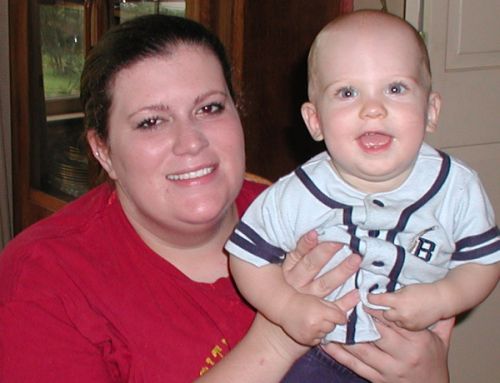 And Marysia and I got to go out on a date. A movie! Dinner out, without a high chair at the table! Adult conversation and no discussions of baby poop or sleeping patterns!

We went to see The Village, the latest film from M. Night Shyamalan. We both liked it pretty well, although I thought it was a weaker film than The Sixth Sense. RottenTomatoes.com rates it 44%, which is "rotten," but not a low rotten. I'd agree with their general assessment that: "The Village is appropriately creepy, but Shyamalan's signature twist ending disappoints."

After the movie we went to Café Venice, in downtown Tuscaloosa. I had a steak filet and Marysia had shrimp and pasta, with a marinara sauce. Tasty, but the real kicker was a piece of cheesecake we shared that was about four inches tall. Yum.

When we got home, we found Ian and Rachel in good spirits. They'd apparently had a fine ol' time.

So, Date Night turned out to be a treat for all involved.

Ian went to see Dr. Jimmie Clark this morning for his 9-month check-up--although he's past 10 months. Got a polio shot (ouch!) and his vitals stats recorded:
And even though he's got a bit of a cough, Dr. Clark proclaimed his general health to be excellent!

Now, if we can just teach him to sleep through the night...

Ian experienced his first (and wouldn't it be great if it were his last?) car accident today, Friday, the 13th!

Fortunately, no one was hurt or even bruised... though it certainly frazzled our nerves and made us thankful that today's cars are built so sturdily.

We were stopped at a red light at the intersection of highways 69 and 82, waiting to turn right. I was driving; Marysia was in the front seat and Ian was in the back, properly (thank goodness!) strapped into his car seat. A guy in a pick-up came up behind us and rear-ended us--going maybe 10-15 mph. It gave us a pretty good jolt, but the air bags did not deploy and there was no major damage to my car (a Nissan Altima). The bumper is pretty banged up and the trunk does not close, but that's pretty much the extent of it.

This is my second rear-ending in 16 months. Both times I was waiting at a red light to make a turn. I think I may discontinue stopping at red lights for the time being.

Unfortunately, the guy who hit us is not insured. So, I'll have to file an uninsured-motorist claim with my insurance company to cover the repair. Even though it's little more than a fender bender, I'm sure it'll cost hundreds (thousands?) to fix. Plus, there's the inconvenience of finding a repair shop and getting my car into it.

But, of course, the important thing is that no one was hurt. The police came quickly and took the report and we were still able to go to Mr. G's for dinner before I had to check in for All Things Acoustic.

All in all, it could have been much worse.

Jeremy and I are gritting our teeth--we've been warned how our life will change once Ian is bipedal. That moment is fast approaching. About 2 weeks ago, Ian started to stand on his own. For the past 3 days, he's been taking single steps, especially when transfering from one leg (like DaDa's) to another (like the table's). Yesterday at the CDC, Heather (the director, and one of Ian's teachers) said he took 2 steps, smiled and laughed, fell to his butt, picked himself up, and took 2 more steps!

Ian's been showing more signs of affection. He's always liked to be held and hugged, but now he's hugging us back, or laying his head on our shoulder when we hold him. It makes his Mama's heart melt!

He's also been playing some new games--he'll hand us things, let us take it, then take it back. Before, he'd just hold it out, but not let go. He's also learning that when objects are underneath or inside something, they're still there, like plastic containers under a rug, or toys inside a box. He's been taking things out for a while now--containers out of cabinets, toys out of baskets, books off of shelves--but now he's starting to put things back in, as well. Mama likes this game!

And Ian's finally given up his 3 AM nursing! He's still a little restless sometimes, but that might just be because he's working on another tooth.

SAN FRANCISCO—Many web users were trapped without service Monday, when a large section of the Internet collapsed under the weight of the millions of baby pictures posted online. "Some personal web pages contain literally hundreds of adorable infant photos," MCI senior vice-president Vinton Cerffe said. "Add to that the number of precious pumpkins on photo-sharing sites like Ofoto.com, and anyone can see it was a recipe for disaster. The Internet simply was not designed to support so much parental pride." Cerffe said he expects regular web-traffic flow to resume once the nation's larger Internet providers are reinforced with stronger cuteness-bearing servers.