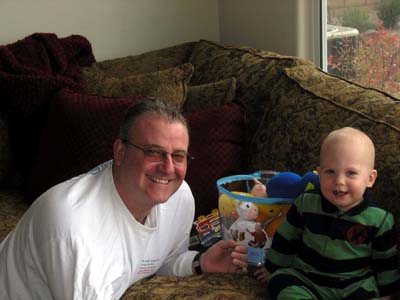 Ian's uncle Chris and Babcia (Maria) flew out from New York on the same day we arrived. It was a very convivial gathering of the Galbraith clan. The accommodations were luxurious, as was indicated by the comfy spa-style robes that Wiley and Ronda provided all their guests.

The weather established new records for rainfall in the area, but that did nothing to dampen our spirits. 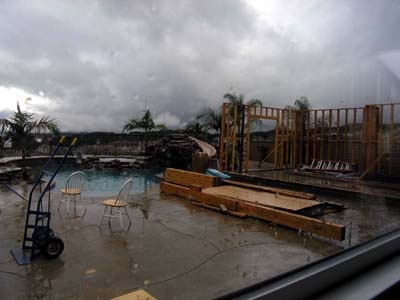 Here one can see the backyard, with recently completed pool and a guest house that's still under construction.

We had to built a barricade of chairs on their sides to keep Ian from climbing the staircase, but he was very responsible about not destroying the Christmas tree -- which remained barricade-free! Ian found a ball, which he carried with him virtually everywhere. 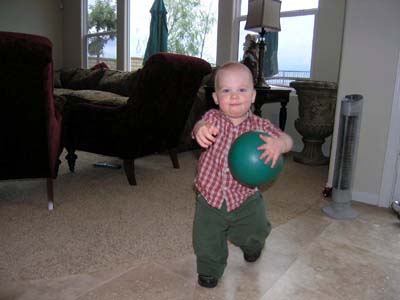 Our three days in the LA area went by too quickly, but we were able to squeeze in a visit from my old grad-school pals, (from left) Val, Barb, and Ken. 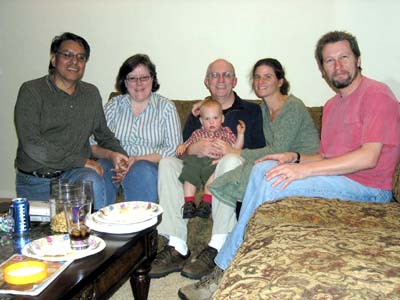 Back to Phoenix we went, where my high-school pal, Loti, and her husband Don drove up from Tucson to visit and to present Ian with a cool bedtime light. 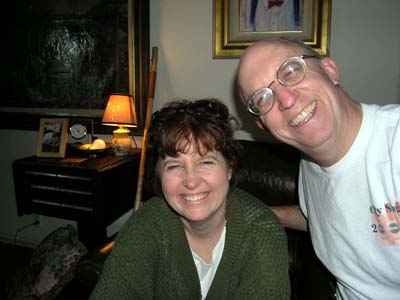 We even watched some videos of Ian. Here he provides a critique of the editing in Ian Learns to Walk. 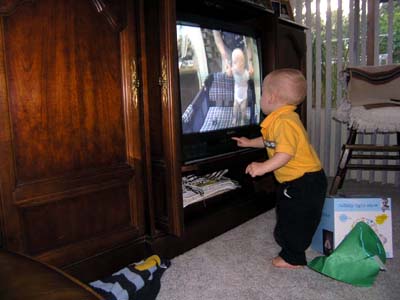 Before we knew it, it was time to return to 'Bama. On New Year's Eve we jetted back, just in time to see the new year in with some Indian food and a (television) viewing of the drop of the ball in Times Square.

And so, a new chapter in the story of Ian begins.

Starin and Jay had a penguin in their front yard -- quite unexpected for Phoenix. The lighting in it was such that after dark he appeared to have a 5:00 shadow. Quite unsavory looking! 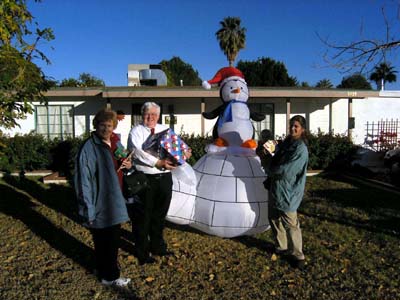 Just to prove that I was not always behind the camera, here's a shot of Ian and me enjoying some "oaty o's" (as we call them) at Starin's house in the high chair that Mom and Dad thoughtfully rented for our visit. (I did, however, take this picture.) 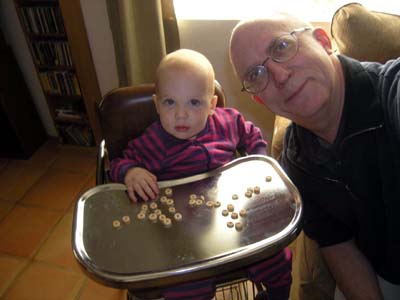 On to Christmas Day...

Ian received many gifts from his generous relatives and friends. Among his favorites were some Nerf balls.

Later, back in Alabama, Ian conducted a science project with one of them. He took a bite of the spongy Nerf material, which "appeared," shall we say, about 10 hours later -- illustrating the speed at which his digestive tract processes Nerf.

Ian gave Penanny a calender with pictures of him for each month. Please note the Nerf ball used in the science project while it was still intact. 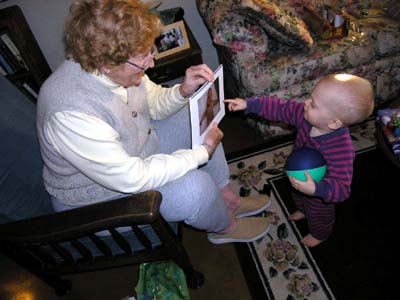 Christmas Day dinner was held at Lydia and John's. Their dogs also attended. 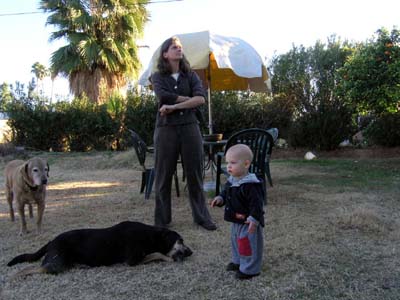 Also in attendance were Reid, Shawna (in back), and Shawna's daughter, Kylie... 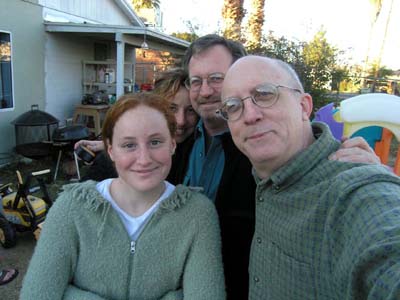 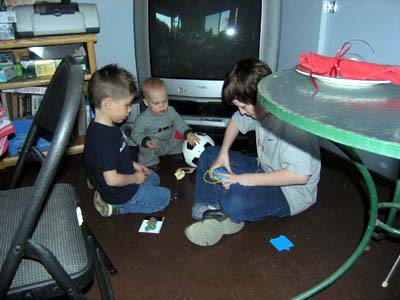 John presided over the kitchen, preparing delicacies such as this lasagna. 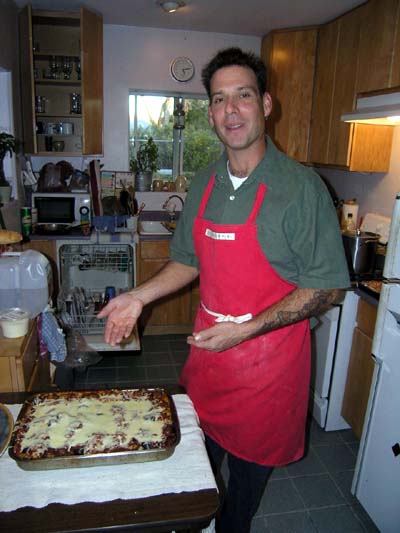 Lydia acquired a yule log -- made of chocolate! Please note the mushrooms! 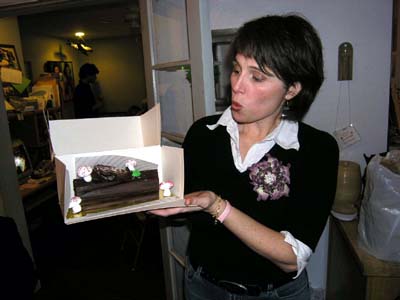 Ian had a great time in Phoenix -- meeting relatives he'd never seen before and soaking up the attention.

Then, the day after Christmas, we hopped over to Los Angeles to visit Marysia's brother, Wiley. More on that in the next installment...

Christmas 2004 found the Butler-Galbraith Confederation on the move. First stop was Phoenix, where Ian enjoyed exploring a jungle gym at the new Indian School Park, right next to where I went to high school many years ago (1968-72). 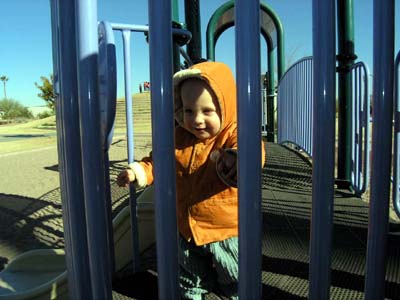 Next he sampled genuine Mexican cuisine at El Bravo. He was particularly fond of corn tamales. 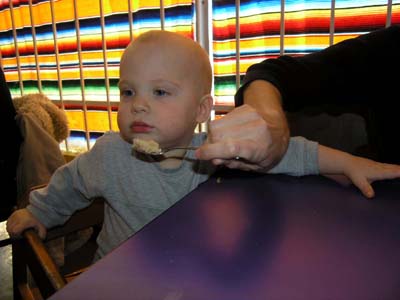 On Christmas Eve we participated in a long-standing Butler family tradition: a reading of A Visit From St. Nicholas, or The Night Before Christmas. Also in attendance were Ian's granmother, Penanny, and his cousin, Sam (whom he met for the first time on this trip). 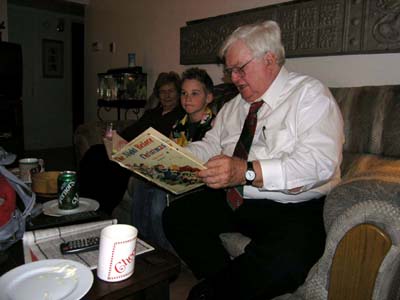 After the traditional reading, a new tradition was born: the blowing of peanut-butter flavored bubbles by Ian's aunt Starin and uncle Jay. Reportedly, the flavoring was to please Starin and Jay's dogs, but that doesn't mean children can't enjoy it, too.

Note Ian's skill at balancing a bubble on his head! 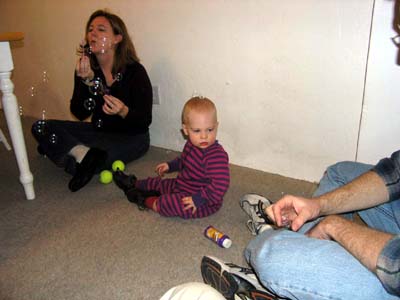 Ian was also introduced to field hockey by Poppa, who was evidently reliving his glory days playing ice hockey in North Dakota as a youth. 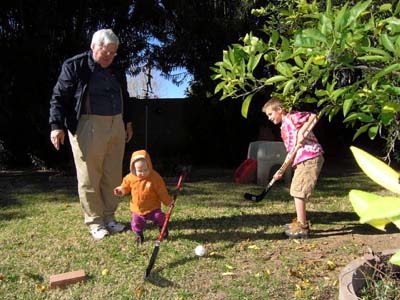