Ian's Second Birthday (His First Outside the U.S.)

He started the day with his baby sitter, Pani Wala, who baked him a cake and brought him a gift of a book about airplanes with text in both Polish and English. She and he played during the morning while Marysia and I went off to see an exhibit about Michelangelo and have lunch on the Rynek Główny (the enormous market square).

Once we returned and Ian had his nap it was time for presents. It turned out to be quite a railroad-centric birthday. 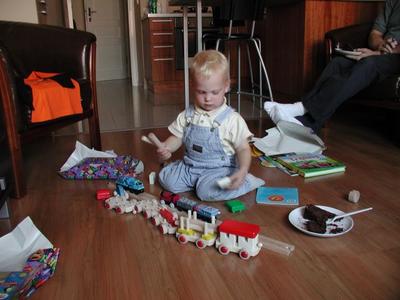 He received:
He loved all his gifts, but the train track may be his favorite. All afternoon he kept saying, "Train track! Train track!" Over and over again.

He did receive two gifts unrelated to transportation:
After gifts and cake, we ventured out to ride a "train" around the old city. That is, we hired a young Polish guy with a golf cart to zip us around for half an hour -- showing us the sights. The cathedrals were lost on Ian, but he did enjoy racing the trams through the streets.

And to Ian's great joy, there is construction going on in the Rynek, with big dump trucks carting gravel and stones. Oh, he loves dump trucks. So, instead of going somewhere nice for dinner, we purchased "fish and chips" (that's what the menu said, in English) at North Fish and carried the greasy envelopes of fried goodness to a spot next to the construction activity.

Ian was in heaven.

We completed his birthday with lody (ice cream) that we licked while strolling the centuries-old ulicy (streets) of the old city.

And that's how one spends a second birthday in Kraków!

Ian sends thanks to everyone for the fabulous gifts.

Today we began life with a two year old...

The Linguistics of Ian

The acquisition of language is a fascinating thing. Of course, Ian's been soaking up new vocabulary like a sponge. We initially noted this in a 25 April 2005 blog entry, but lately Ian's learning of new words and phrases has really accelerated. Plus, he's started stringing words together into primitive sentences. This language acceleration led Marysia to start writing down words as he's learned them.

Not long after I arrived here in Krakow (yes, I've been here three days!), Marysia showed me the list. My first thought: cool! My second thought: some of these need to be recorded in Blog Ian.

boat in the water
thank you
I draw more?
Where'd it go?
shoe on
Be [right] back.

I kick rock.
I go.
please

stuck
Wala [his babysitter in Poland]

backpack
Bring help. [! This comes from a book about boats. It has a picture of a rescue boat that "brings help."]
tree

barbeque [proof positive that he is my son! And perhaps his first three-syllable word.]
drink
cup
train track

dice
sit down
frog
mountain
[good] night
bumble bee
lady bug
this [or] that? [this seems like a particularly complicated concept]

We'll add more to this list as Ian progresses...


Mama hot tea
cow jump moon (from the book, Goodnight Moon, which has a picture of the cow jumping over the moon)
water wheel
off (he's said on for months, but now finally says off, too).

Fortunately, Ian and Marysia were not home the day that Hurricane Katrina slammed into New Orleans and then worked its way up through Mississippi. The eye passed within 100 miles of Tuscaloosa, which was plenty close enough.

We lost power for three days and cable-TV/Internet access for 9 days. A sizeable limb from one of our oaks fell across the street--blocking it for several hours. 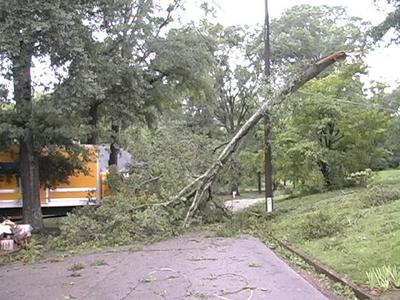 My neighbor, George, and I were in the basement for three hours, playing Crazy 8's by candlelight, while the storm raged. We heard this limb snap and tentatively came back upstairs to see what had happened. Nothing we could do about it then so back downstairs we went.

I'm just glad I didn't have to keep Ian away from the water heater and furnace while hiding out from the storm. And "camping" in one's house without electricity... well, that gets old after an hour or two.

I shot some video of the aftermath and slapped excerpts from it up here:
The files are fairly large and require a fast Internet connection to download. 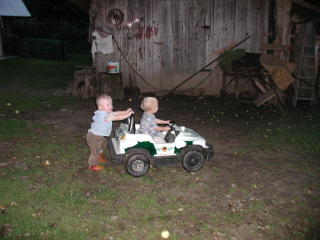 Ian with his friend Kuba

It's about time Ian shows everyone what he has been up to in Poland. (Click an image to enlarge it.)

Some of his favorite activities include playing in sandboxes. There are several parks with excellent sandboxes within walking distance of our apartment. Here he is with his friend Antosia: 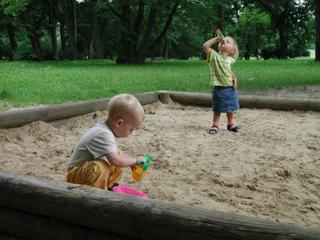 In Krakow, he likes to feed the pigeons in the Rynek (The Market Square). 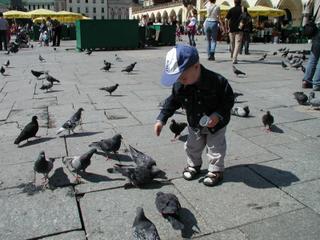 The Bieszczady Mountains, where we're also spending some of our time, has its own amusements. Here, Beata's mom Pani Ela lets him sit on a tractor. 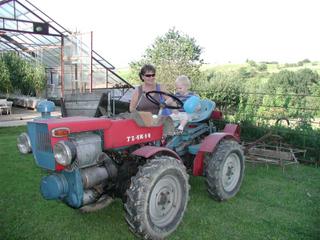 There's also a big lake nearby where Ian has gone swimming. He got to captain a ferry with his Mama: 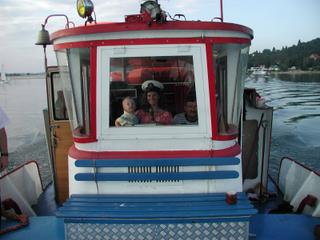 Ian's a fan of big machines. We visited this bulldozer-digger daily: 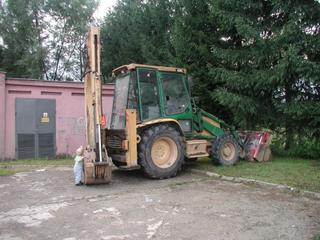 We also spent a week on a farm. Ian got to watch a cow being milked by hand. He also got to chase chickens and ducks. But his favorite animal was the cat. 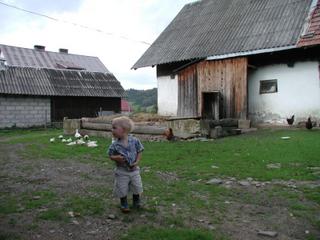