Ian and the Purple Crayon

Ian decided he wanted to go out for Halloween as one of his favorite book characters: Harold from Harold and the Purple Crayon. 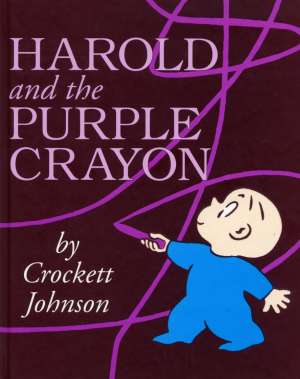 Of course, he already bore more than a passing resemblance to Harold so all he needed was clothes and a purple crayon. 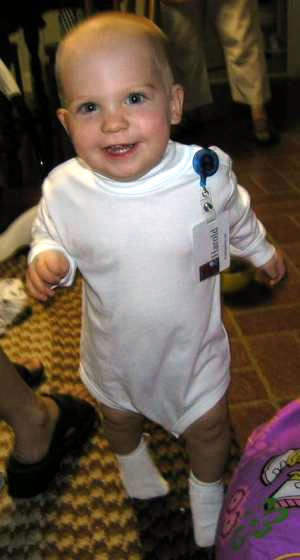 With a bit of Photoshopin' and the help of an iron-on transfer, we transformed a white, turtleneck shirt into a custom Harold costume. The text reads, "The bedroom window was always right around the moon."

We were invited to a Halloween party at the Roach-Trosts (Catherine, Ted, Nathanial and Benjamin). We packed up Harold and his crayon and were off.

Marysia went as a college professor and potter. I went as the Rosetta Stone (see t-shirt below, from the British Museum). Fortunately, I had no requests for deciphering hieroglyphics. 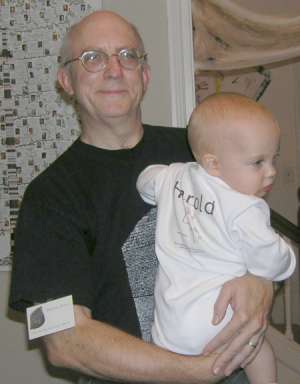 We were accompanied to the party by Krystyna, a friend of Marysia's from Poland who's been visiting. During the past week, she's swept/mopped the house from stem to stern, removed the grass sticking out of the concrete in the cracks in our walk and driveway, and cleaned all of the house's windows (probably a first in the three years we've been here). All of this was done without our asking. Krystyna says she has to keep working or she'll be bored. The house is looking cleaner than it has since we stopped using Maid to Perfection in June!

As of 5:19 a.m. on the 27th, Ian has been on this earth one entire year. Marysia and I find it hard to comprehend, but this also means that we have been parents for one entire year.

(Although on those nights when Ian wakes us at 4:00 a.m. time does seem to move more slowly.)

We decided to take a low key approach to the event, however, and did not throw a huge bash. Instead, we got a small carrot cake (in remembrance of our wedding cake) and placed one lone candle in it. 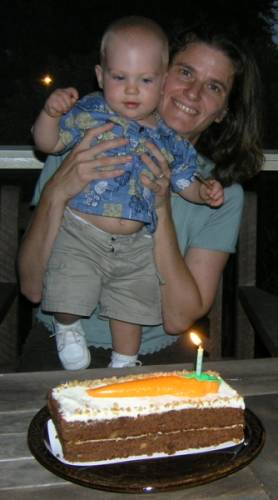 "Happy Birthday To You" (© Summy-Birchard Music) was sung and, with Marysia's "assistance," Ian blew out his first birthday candle. 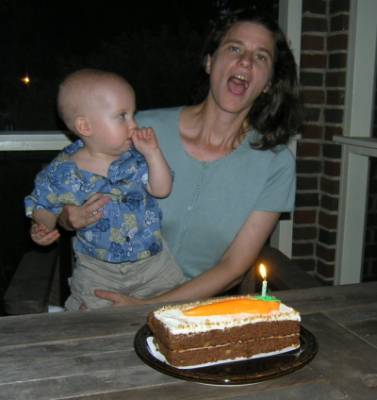 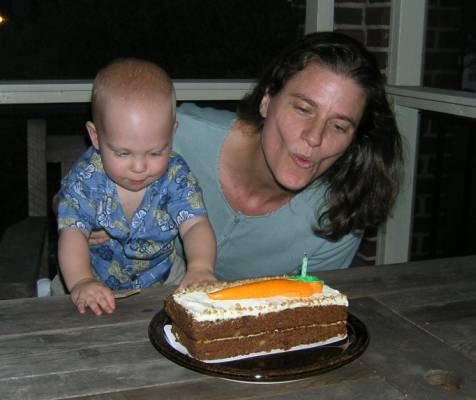 Ian received many cool gifts, but his favorite may have been the one provided by Poppa Butler: a piece of driftwood from the Thomas Point Beach where Ian first swam in the Atlantic Ocean. (See the 24 July 2004 entry for more details.)